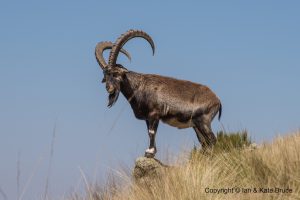 The park was primarily created to conserve Walia Ibex and other endemic species. Its scenic value, probably the most rugged in Africa, also formed the backbone of the concept for conservation of the area. These unique wildlife and breath-taking views on a landscape has further led the park to the recognition as a World Natural Heritage Site in 1978 by UNESCO.

Location: the Simen Mountains National Park is situated on the northwestern side of the Simen mountains massif in northern Ethiopia, Gonder, with an altitudinal range from 1900 to the highest peak of the African horn, Ras Dejen, at 4620m asl. It lies in the center of a triangle formed by Gonder, Lalibela and Axum- three major Historical Northern Routes. It is roughly about 900km from Addis Ababa. The head quarter is situated in debark, where entrance to the park is permitted.

Rainy Season: There is a single rainy season in the area that occurs between June and mid-September. Average annual rainfall is about 1550 mm.

Temperature: the area usually experiences a cool climate, which ranges from -2.5 to 180c. During dry season early morning is the coldest.

Tours
The main attraction of the Simen Mountains National Park is its biosphere such as steep-cliff, escarpments, landscape, cool climate and endemic wildlife. These spectacular attractions can be largely discovered through trekking. So, trekking is one of the main reasons to visit the park.