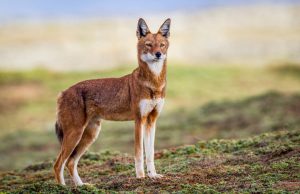 The park established primarily for the protection of the Mountain Nyala and Ethiopian Wolf., and other features including spectacular scenery, an extensive Afro-alpine plateau and moist highland forest.

Location: the park is located south-east of Addis Ababa. The area is within an altitude range of 1500-4377 m asl. The Head Quarter is situated at 400km from Addis near Dinsho town in Bale zone.

Rainy season: is followed by a four-month dry season – from November to February. In general, the rainfall in the area is characterized by one-eight-month rainy season, with greater bulk of the rain falling in April and then august to October. This means that from May-July, there are showers, usually in the afternoon. The area receives up to 1200mm precipitation annually.

Vegetation types: Afro-alpine moorland, heather, woodland, Gaysay grassland, and Herenna forest. Each of these zones has their own characteristic flora and fauna. These vegetation types are primarily demarcated by altitude.

Major wildlife species of the park: the park harbors diverse flora and fauna and center for endemicity, including amphibian.

Major physical / geological features: pronounced by mountain formations, extensive plateau, valley and lava outpourings. Over forty streams arise within the park. These join to form four major rivers- the Webe Shebelle, the Web (leading to the Genale and Juba rivers), the Wemel and Dumal Rivers. Alpine lakes are also characteristics features on the Sanetti plateau.

Dinsho hill: there is nature trail designated toward the hill top. Along the trail is a pleasant to walk for the massive Hagenia and Juniperus trees, the sightings of mountain nyala, Menelik’s bushbuck, warthogs and, occasionally, bohor reedbuck. In the evenings, the song of Abyssinian catbird can often be heard; the Abyssinian ground thrush seen among the undergrowth. The views from the hill top, over the Gaysay valley, are spectacular. The museum offers information on the area and displays an interesting collection.

The Gaysay valley: it is the northern-most area of the park. It is an area of grassland, scrub, swamp and river. It is an area good for sighting pack of wolves, bohor reedbuck, warthog, mountain nyala, Menelik’s bushbuck, and birds like harriers, augur buzzard, Rouget’s rail and Abyssinian longclaw. Here, Web River flows through a deep and spectacular gorge.

Sanetti plateau: an extensive plateau where Tullu Deemtu is found. The plateau is austere in its beauty, almost lunar. Warm clothes and a waterproof jacket are required as it can be chilly as a result of the strong wind blows. As ascending either side from Goba or Delo Mena to the plateau, discovering vegetation variation with altitude is a rewarding experience. On the Sanetti plateau Ethiopian wolves and rodents including the giant molerat can be seen. Wattles cranes can also be seen in this area. Another magnificent sighting on the plateau is its pigmented alpine lakes. The summit of Tullu Deemtu (4,377m) is accessible by road, and from this top the full extent of the Afroalpine ecosystem, including Herenna escarpment can be clearly observed.

Herenna forest: it can be reached through a road traverses Sanetti plateau. The abundance of vegetation here challenges most distinctly the stereotypical images of Ethiopia, and it is the second largest patch of forest in the country. The larger trees include Podocarps, figs, wild stocks of coffee and Schefflera forming closed canopy. The best way to visit this is to camp in Katcha clearing. A portion of the steeper slopes are covered with mountain bamboo. Herenna forest is the best places for viewing the elusive animals, including Bale monkey, guereza, common baboons, warthogs, common bushbuck, giant forest hog, bush pigs, serval cats, genets, civets, porcupines and hyaenas. The forest does contain some large carnivores-lion, leopards and hunting dog. The birds are equally elusive such as Abyssinian hill babbler, Abyssinian crimson-wing, Ayre’s hawk eagle, Silvery-cheeked hornbill, black-winged lovebird, black-headed forest oriole, Yellow-fronted parrot and Narina’s trogon. The forest also attracts a large number of migrant birds including Palaeartic warblers.

Web valley: the route is so scenic with a rewarding view of the plain. This is the best place for wolf watching, and to see rock hyrax and Starck’s hare – and the Golden eagle hunting them.

Trout fishing: two species of trout- rainbow and brown were introduced in the Danka and Web Rivers, their original stock came from Kenya. Permits for fishing in Web River can be purchased from the park. Contacting a fishing guide at Dinsho is advised to know best pools and time of day to fish.

Sof Omar caves: the river gorge is spectacular for its depth and for the regular limestone cliffs that line it. Visiting Sof Omar gives one the opportunity of also glimpsing some of the lowland wildlife. These include lesser kudu, greater kudu, dikdik and Salvadori’s serin.

Webe Shebelle gorge: the southernmost population of gelada baboon can be seen. The river is also waiting for a rafting operation to start in the future.

Dodola-Adaba trekking: was established specifically to provide alternative sources of income to the people living in local communities. It is one of the best organized ecotourism in the country. It is an excellent place for trekkers and hikers. There is a series of five mountains joined by trails for trekking.