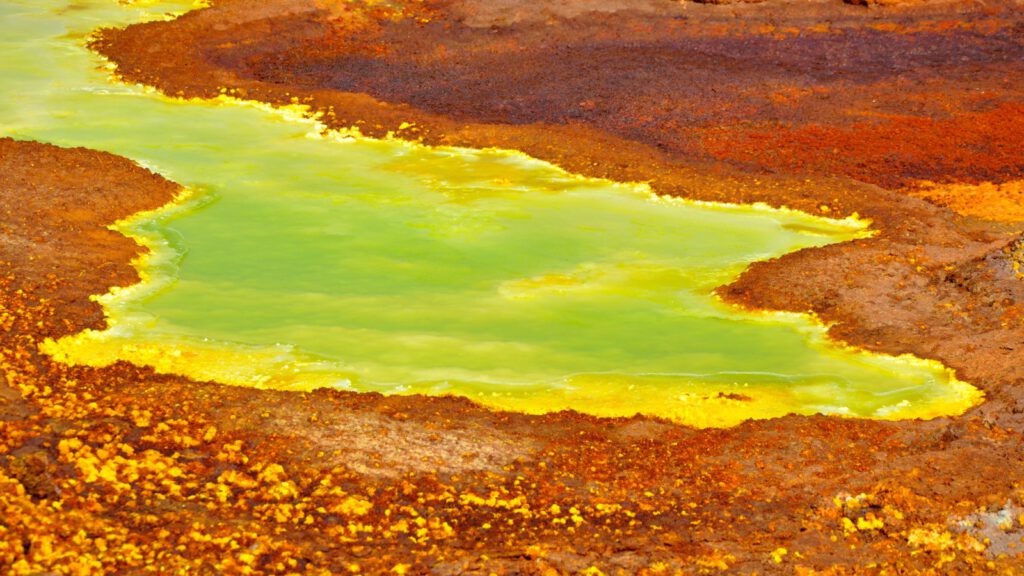 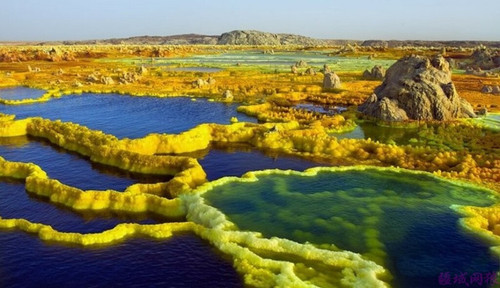 The Danakil Depression is found in the Danakil Desert, along the borders of Eritrea and Djibouti. With average temperatures of 35°C – there are days when temperatures exceed 48°C – and an average annual rainfall of between 100 and 200m, it is rightly considered one of the most inhospitable places on earth. The National Geographic went so far as to call it the cruellest.

Situated at the head of the African Rift Valley, in the Afar Triangle, on the so-called triple point, the Danakil Depression constitutes one of the lowest places on earth; it’s 100 below sea level depression, the direct result of the retreating actions of the Arabian and (two halves of) the African plate. Located thus, the area is especially volatile.

The Danakil Depression is the northern part of the Afar Triangle or Afar Depression in Ethiopia, a geological depression that has resulted from the divergence of three tectonic plates in the Horn of Africa

Day 1 :
Addis flight to Melkelle – Ertale
<p>In the morning our driver will pick you from your location then depart to Ertale via Abala. In Erepti Town you will stop for lunch and pick 4 security personnel as a protocol for security. At around 5:00 you will be in the camp site near Kisrawad. The trekking will begin at 6pm accompanied by Security guys and a camel to carry your camping gear. You can get as close as possible few meters from the lake under the guidance of your tour guide. Early morning shortly after the sun rise trek back to the camp for breakfast and began the road to Hamedela.</p>
Day 2 :
Ertale – Hamedela via Dodom
<p>After breakfast in camp Askoma, we drive to Hamedela via Dodom desert, dodom is adventureous 80km desert and full of eye catching Smoking Mountain. Hamedela is 16km south of the salt Lake Assale, once in Hamedela we will drive north to Lake Assale for a beautiful sun set, on the way enjoy camel caravans going back from the salt excavation fields, then you drive back to Hamedela. Overnight in Hamedela.</p>
Day 3 :
Hamedela – Dallol
<p>This day you will have to wake up early morning to visit the Dallol Depression The colorful landscape of Mount Dallol, The salt canyons, sulfuric acid ponds, The 2000 years old Traditional salt excavation methods north of lake Assale, Black sulfuric acid ponds, Yellow sulfuric acid ponds, Iron mountains, The ruins of the potash company And at around lunch time drive back to Makele, we will be there in the late afternoon .</p><p></p><p>End of the tour.</p>

Do you have any age restrictions?

You must be at least 15 years old to be eligible to participate in the majority of our trips. For all minors, an adult must accompany them. Our Adventure tours have a minimum age limit of 18. Younger children can accompany the adults in leisure and educational trips, but check the trips for their individual age requirements on the trip details page.

Usually, our trips don’t have a maximum age limit, but a Self-Assessment Form is required for participants who are 70 years and above.

Is it okay for a solo traveller to join a trip?

Yes, there are a lot of solo travelers in each group and it adds an extra dimension to the trip by allowing you to know like-minded people and share your experiences. About 60% of our groups are solo , other are group of friends and couples .

After your payment is completed and your booking is confirmed, if you cancel your booking 45 or more days before the departure, you will get a 50% refund. If your trip is departing in less than 45 days, the amount is non-refundable. So we highly recommend taking an all-inclusive insurance policy, so you know your investment is secure! For further information regarding cancellation and refund, please refer to our terms and conditions.

What is included in my trip?

Some of the meals, accommodation, transport and activities (it will be indicated in detail in the itinerary). We try to include more to add value in your trip.

What is not included in my trip?

Mainly international flight tickets to the reporting destination, visa fees and insurance fees which is a must.

What are the accommodations provided?

If I am a solo traveller, will I be charged single supplement?

As a solo traveller, you will be paired up with another participant of the same gender as per your passport information. If you’re not comfortable sharing a room with someone, you also have the choice to pay for a single supplement.

Departing west from Addis Ababa, drive to the Menagesha National Forest for some hiking. Here you will enjoy the wildlife, such as the colobus monkeys...
View Details
Available through out the year:

3 Days
Awash National Park is one of the national parks of Ethiopia. ... The Addis Ababa - Dire Dawa highway passes through this park, separating the Illala Saha Plains to...
View Details
Available through out the year:

Drive north from Addis Ababa (about 100km) to the Debre Libanos Monastery. This monastery was founded in the 13th century by St. Tekle Haimanot, who,...
View Details
Available through out the year: